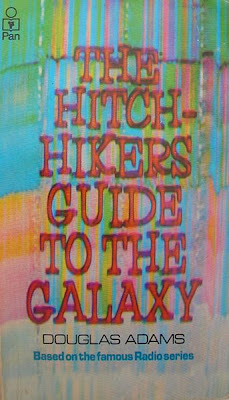 I used to despair that I would never be a novelist, because I can’t write lengthy, epic novels. And I’m not using despair lightly — we’re talking all the gnashing of teeth and melodrama that comes with being, um, a freshman in high school. Okay, now I don’t even take this story seriously, but hear me out.

I cap out at about 56K, maybe 58K on a good day. And I mean, 58K would be a seriously verbose novel for me. I’m more likely to complete a story in about 30K – 35K. This is just how I roll, apparently, and I don’t know why. I’m still editing my second novel, so maybe I’ll have that moment where I understand why. But in the mean time I’m okay with this limitation. I believe that I can tell a good story in under 60K. And you know why?

I’m not going to act like I’m the biggest Douglas Adams fan, though I am immensely fond of The Hitchhiker’s Guide to the Galaxy. (I even have a bitchin’ tattoo.) This book. Oh man, this book.

When I was a sophomore in high school I came across a box of books ready to go off to the thrift store. There must’ve been four of them all stacked up behind the couch, and I spotted this book at the top of a pile. I remember exactly how it looked, even though I don’t have it anymore.1 My mother picked it up in the UK when she was seventeen. This was a beat-up, clearly loved paperback. It had so much character. Even googling for the image for this post — and finding it — made me giddy with memory. I asked my mom if I could have it.

This was the funniest book I had ever read. I think that assessment still stands, actually; I can reread it, even knowing all the jokes, and still laugh my fool head off. It was clever. It was brilliant.

I’m not saying that I’ve got a style anywhere near as engaging or funny as Adams — I don’t. I probably get more of my sci-fi tendencies from Lois McMaster Bujold, the writer that actually made me really love sci-fi. I get my, um, view on romance from the bazillion romance novels I read in middle school. But I still got the most from those 46,000 words.

The Hitchhiker’s Guide to the Galaxy was the very first novel I’d read that was both well-known and short. Chapters were brief, scenes were snappy, and I was in love. Oh Douglas Adams, you gave me hope, even if I’m hopelessly incapable of keeping track of my towels.

1. Years later, some bitch friend of my brother’s borrowed it. I never saw it again. This was, like, 2005. I still haven’t forgiven her. Nor have I forgotten the lesson to never share with people you don’t like.

2. More years later, I went and saw the Hitchhiker’s Guide to the Galaxy movie on opening night with my mother. I don’t care how bad that movie may have been, it will forever be fond in my memory for that alone.

3. While writing this my husband pointed out that Douglas Adams was also not very punctual, so clearly we are soulmates. #FangirlDreaming

Ashley M. Hill found her voice in science fiction when her curiosity about technology coupled with the lifelong urge to tell stories. Her interest in social and feminist issues shapes how she approaches the genre. She's pursuing computer and network repair for her day job.

This site uses Akismet to reduce spam. Learn how your comment data is processed.